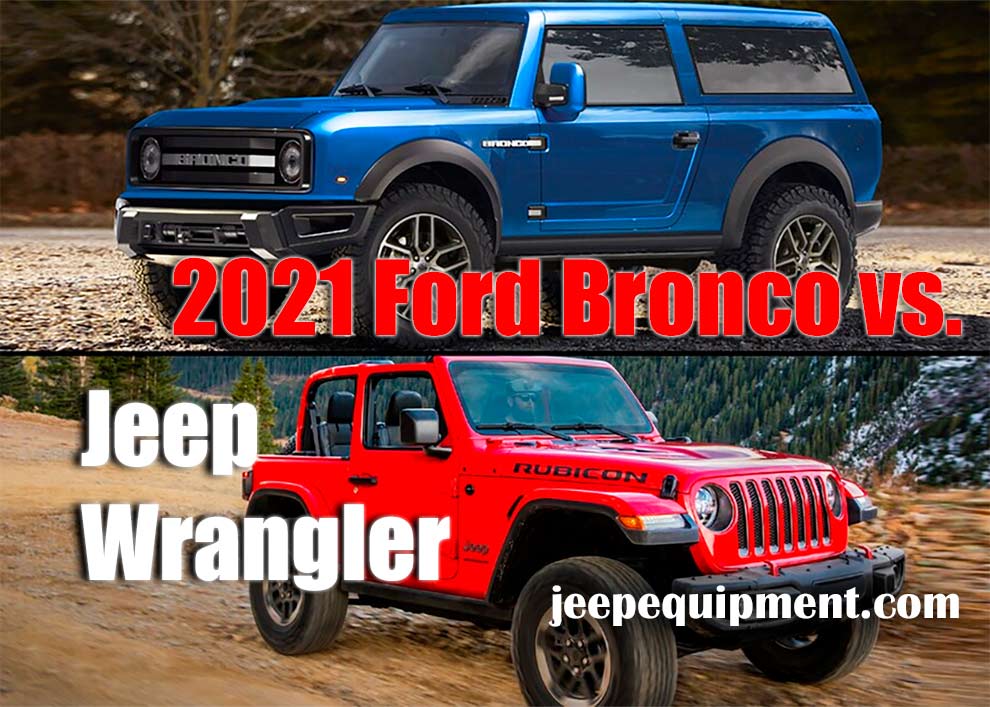 Hi guys! I’m Andy and now a bit of backstory on the Bronco. As many of you know, it was released in 1965 and ended production in 1996. There was the first-generation Bronco, the Bronco 2, and the last was the full-size Bronco. Now for the past 24 years the Bronco has not been open to the public and ended with this full-size Bronco to all those Ford aficionados and die-hard Bronco fans there really was no option for them other than the Jeep Wrangler. But here we’re going to be discussing that. Should you buy a Jeep Wrangler now or wait another year for the Ford Bronco? Today I’m going to go over many of the different specs of both, some of my personal feelings and what I’m really excited about the Bronco and some of the things I think the Jeep or Bronco were better than the others and vice versa but we’re going to go through it today. So, stay tuned! 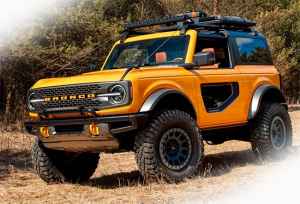 Well, the first thing we’re going to talk about is what is the first thing you see in this vehicle? It’s the exterior of the Bronco versus the exterior of it. The exterior of the Bronco is pretty similar to the Jeep Wrangler in the same way that you can remove the doors and the top off the bronco, and the Wrangler is that in the Bronco you actually get all four or two doors in the back of the bronco can stow away. I think that’s a great feature there!  You can see that the swing door is definitely higher than the tailgate of the jl wrangler, but both swing on the same side and keep the tire on the back of the factory The Jeep Wrangler Mounted Mount. The license plate in the back-left corner is the same as the Bronco. It will be exactly in the same place and the bumpers look pretty closely. I have to be honest, they look pretty similar if you look at the two now as far as soft tops and hard tops are both going to have a soft top and a hard top. You can at Bronco order a Sunrider style soft top from the factory for your hard top. I’ll also say that although both of them have roll cages, the Bronco doesn’t have a center cross member for a 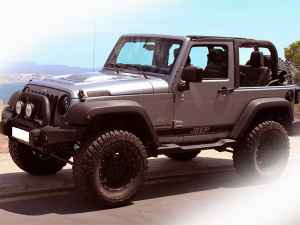 soundbar or light that gives you a full open-air roof once you take the top off, it’s like a huge space in there and you can look up without annoying bars especially for your rear passengers. I think that was crucial for them and now really gives you the open-air feeling on the outside too and I have to tell you that Bronco looks extremely aggressive, both have the rounded wheel arches, but the Bronco just seems to be a lot more open.

I have to be honest, if you can fit a 35er out of the factory, you’re doing something right and really preparing for the aftermarket to take you to the sky-high and throw bigger wheels and tires on the exterior, have to have a Bronco and Jeep so that both can throw roots to their legacy. You can do that on the front of the bronco just on the headlights and the overall shape of the front grille is the same with the jeep wrangler.

Next, we will talk about the interiors of both vehicles. The Bronco comes with a keyless entry standard for the Jeep, which is an option, and so some Jeeps that you can still get with manual door locks are pretty dated compared to a Bronco that comes standard with the keyless. You go up hand on it and it opens up for you!  I also have to tell you guys that the 8-inch screen comes from the factory on a Ford Bronco which is the standard size.

I can do a 3.5-inch screen that is black and white and has barely any colors so the jeep just looks like it’s 10 years old and the Bronco is just coming out. As far as the seating goes, the two-door will have four seats and the four-door will see five people; the dashboard is very reminiscent of the newest model Bronco. Great job! The same i love the flat dash look and like not everything is sticking out to you in the jk that stuck out way too far and wasn’t like anything in the past, so they really got back to their roots with the jl and made it look like it’s in the too cj seating was available. The Bronco will apparently be available with waterproof vinyl seats. It’s the same as a boat material which is UV resistant. You can literally throw a gallon of saltwater on it and it won’t hurt. You can still get the leather and you can get fabric but nothing vinyl, nothing waterproof.

You have the terrain choices as well as your four-wheel drive which will be a gear shift knob and then you have either your 10-speed automatic gear shift or your 7s. I think when you’re off-road you really want to feel like you’re falling over gear and feel ready to go, so the props on this jeep have pretty much the same setup. Now Jeep has exactly what you get, every Jeep Wrangler has standard all-wheel drive but a lot of the midsize SUVs. In their class they don’t have standard all-wheel drive, they’re either front-wheel drive or rear-wheel drive or if they have a mix of all-wheel drive, it’s not the same as a 4×4 on the Bronco or the Jeep Wrangler. Another thing that I really liked about the Ford Bronco was the availability of trail maps.

The new Wrangler 2021 has the option to order the front camera and have a rear camera but not a 360 so the 360 and it had track spotter assist. I have to say if you’re out and about you shouldn’t be alone, but if you’re in a tech field and want to see it all, make sure you don’t destroy your brand-new Bronco, these 360 cameras are going to turn out to be a lot in my opinion prove useful.

Next, I’ll go over the engine, drivetrain, and some of the more technical specs. As for off-roading, I’ll tell you guys that the Bronco was released with a 2.3L Ecoboost and a 2.7L Ecoboost which 27 is found in the brand-new F-150 and the 2-3 in some Mustangs and the smaller cars but still does a lot of power. Now the Jeep Wrangler is either with a 2.0 a 3.6 or a Diesel 3.0 Liters, so all of these are great engine options, but I feel like Bronco gained it a bit with the 2.7 Ecoboost, as it makes way more horsepower and torque than any of the Jeep’s factory petrol engines. I’ll also tell you that the Bronco comes with a 7-speed manual or a 10-speed automatic that was compared to the Jeep’s 6-speed manual or 8-speed automatic with additional gears. I’ll tell you this will allow Bronco to be factory-fitted with a 4.7 gear ratio. You have more gears, which means you can move up higher with that gear ratio and not rev up gears when you only have six or eight gears, and still be able to keep a happy highway speed as well as a good creep ratio for the ride up the trail. Going to the crawl ratio with the Rubicon getting as much as possible is an 84 to 1 creep ratio with this 41-transfer case. Now it’s rumored in the Bronco that you can get up to a 97 to 1 creep ratio, so that’s a lot much higher! With all that much slower driving, you can still have power built in your transfer case that gives power to all four-year-old wheels that are planted.

Speaking of planted wheels, the Bronco and Jeep Wrangler both come with lockers in the front and back and a stabilizer bar, but so does the Bronco. With the Jeep Wrangler Rubicon you have to make sure that your Jeep is on level ground in order to be able to deactivate your stabilizer. Both the Ford Bronco and the Jeep Wrangler have exactly the same axles. The Ford Bronco however has independent suspension in the front, they still use the Dana insert in the middle, it can be either an m80 or an m210 depending on what you get, and in the rear you have an m190, an m210 and an m220. But with the independent front suspension you can go much faster and it will give you a lot smoother ride on the trail and off-road.

If you hit a rock, you don’t want to, so I’m excited to see that the wheel sizes of the ford bronco and jeep wrangler also differ a little. The ford bronco actually has a 16-inch wheel and a 17-inch wheel and an 18 and then the Jeep, there is only a 17 and an 18-inch wheel up to the tire size on the Bronco you can get a 30 inch or a 32 inch or a 35-inch factory tire. Now you can get a 29, 31, or 33-inch tire on the Rubicon with Jeep and they’ll be a mix of all. They switched a lot of different brands, but you’re going to get a 33-inch with that, so one of the most important parts for off-roaders is the ability to have a great approach and departure angle. I’m going to say now that the Bronco has great numbers. The Jl Wrangler has great numbers too but I feel like the Bronco has good numbers.

If you get your Jl Wrangler up to 35, you will see better numbers than this, but out of the box they are definitely great. I also say the towing capacity of both vehicles is 3,500 pounds and there is a class 3 rear tow bar that can pull small RVs or small off-road trailers. Now the ground clearance on the Bronco is 11.5 inches in the middle and the ground clearance on the Jeep Wrangler is going to be 10.8 inches and that is the ground free space that applies to the entire vehicle, so that any obstacles lower than the two vehicles can now cross them. Bronco includes those LED headlights, keyless entry and a lot of other features that the Jeep doesn’t have.

If the price is a bit higher, keep in mind that while the Jeep is an add-on that you will likely get at the exact same price now on the base two-door hatchback, it starts at twenty-two thousand five hundred dollars and that is what you get those features. Four-door starts at thirty-three thousand two hundred dollars, on the base Jeep Wrangler you’ll be at twenty-eight thousand dollars and then thirty-one thousand dollars for the four, so what you see will be a very comparable price, but you get a lot more for the Bronco.

Okay, see you next time guys, I’ll hopefully see you on the trail! I hope this article was helpful to you and have a good day!